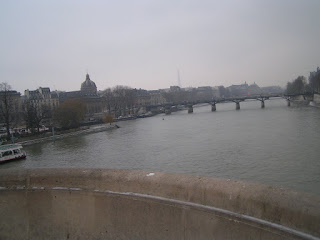 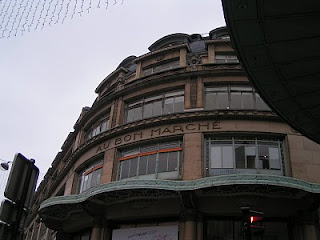 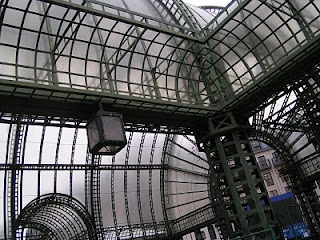 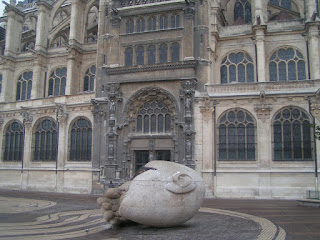 (Whether it is men, women, fashion, or furniture,the beauty is what distresses me.)

This was a quote I saw in a window yesterday while walking the streets of the city of Paris. I meant to catch the bus but the interesting buildings
the details, the shapes emerging from the fog revealing a new interesting building, square,site kept calling me forward. The streets, the squares, then I was across the river via Pont Neuf. Along the quay.
I decided to follow Rue Bonaparte.Academie des Beaux Arts.Contemporary Art Galleries, Designer clothing shops. Le Bon Marche. Designer Clothing shops.

The magic of this city. One can just walk, follow streets with names that are vaguely familiar and come across someplace that is really interesting.
Les Deux Magots. The intellectual's cafe. and just over the way is Cafe de Flore there is a book store in between. I sat there for a while waiting for Simone or
Jean-Paul to whisper something to me. ..maybe it wasn't the right time of day.
I looked around for the contemporary intellectuals... everyone was texting, ipodded, or talking on the phone. Salut!


Did I every tell you how I even came to be here in Paris? It is a story of synchronicity, serendipity, generousity and artistry.
Through posting my paintings on Facebook, I became friends with Marilyn Campiz, an artist with words- The Paris Diaries.
So we are a mutual admiration society of two, for each other's work and for shared interests.
In September...
She asked if I would like to do a portrait of her for her new book. She was in Korea at that time. She would be in Paris for New Year's
She suggested that we meet in Paris. She suggested the Jim Hayne's Sunday Dinner and Swan Bar New Years...
That sounded, well, ...perfectly thrilling.

So I said I would consider the matter. Hmm, hmmm, hmmmmmmmmmmmmmm. I told my friend Linda this story.

My friend Linda called me back...(a month later) and said...'I bought the tickets to Paris.' REALLY

Not only did she buy the tickets, she has paid for everything! the apartment, the delicious food. the tours. A beautiful scarf, fabulous fabric.
THANK YOU Linda. It really has been a fantastic journey!

And from this city of art, in reciprocity, I will do a painting for her ...of this trip. So it is thrilling and thrilling. Art of living.
I met with Marilyn, we talked and talked like old friends that had so much to say to each other. I will make an image for her. Thank you Marilyn Muse for your ideas on wings.

Still. Amazing things happen in this world!
Posted by Unknown at 10:40 AM

This work by Elaine Berglund is licensed under a Creative Commons Attribution-Share Alike 2.5 Canada License.

Listen to Heart Of Connection on Blog Talk Radio